5 Reasons Why You Should Advertise With Bumper Stickers 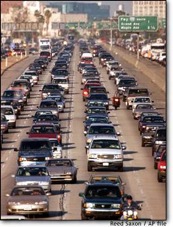 How often do you find yourself stuck in traffic, noticing that the car in front of you has a flashy sticker posted to the bumper? Are you going to read it? Of course! Why wouldn’t you? Most people read stickers posted to bumpers and windows whenever they get a chance. Well-written bumper sticker messages leave a positive and lasting impression on those who read them.

How many people do you pass on your morning commute? Hundreds? Thousands? What if you could leave a lasting impression on every one of them? Are these potential customers worth marketing to? Bumper Stickers put your company name, values, and slogans into the minds of a huge audience every day. A study done by Perception Research states that mobile advertising generates 2.5 times more attention than static billboards. In a poll conducted by Outdoor Advertising Magazine TACA’s market research, 96% of respondents believe mobile advertising is more effective than traditional outdoor advertising. What more could you ask from a marketing tool? Talk about more bang for your buck!

The superior exposure your company name and logo found on a bumper sticker will build your identity and help you stand out from the crowd. Brand recognition is a powerful force. Start topping competitors who only use conventional forms of advisement. It’s simple psychology: the more potential customers see your company’s name, slogan, and symbol, the more likely they are to seek out what you have to offer.

Compared to television and radio advertising, Bumper Stickers are by far the least expensive. According to StrategicMediaInc.com, an average weekly radio advertising slot for a mid-sized city goes for around $2,500. Local television advertisements can cost as little as $5 for a 30-second time slot but may be seen by fewer than 1000 viewers. According to entrepreneurs’ resource Gaebler.com, the average cost of television commercials on less popular national programs may run in excess of $100,000 for 30 seconds. These expenses add up fast!

Bumper stickers are far more cost-effective. You can print 1000 custom bumper stickers at Eventgroove for under 600 dollars. That’s 59 Cents per bumper sticker! Compared to television and radio advertisements, that’s pocket change! Plus, that bumper sticker can continue advertising your business, every day, for years to come, with no renewal fees.

Bumper sticker advertising is an effective stand-alone marketing approach, but it’s even more useful as one of many marketing implementations in a larger campaign. Designed correctly, bumper stickers reinforce the message you are transmitting through social media, direct mail, broadcast, and/or print media for a minuscule cost. So if you’re already planning a huge marketing blitz, add a lot of extra impact for a little extra investment, and behold the power of synergy!

Put it all together for a secure fit: your budget stretches further when you spread your message with bumper stickers, the glue that holds your marketing campaign together.

Back to blog Back to top
My Favorites